To Sell or Not to Sell: Silicon Valley Acquisitions Market Heats Up | Fast Company

Yet the history of small Internet companies being snapped up by large ones isn’t pretty. Just in the past few months, eBay has had to unload both StumbleUpon (the Web recommendations engine it bought in 2007 for $75 million) as well as the Internet-phone service Skype (purchased in 2005 for $3.1 billion), each for a loss. Yahoo is looking to rid itself of several properties, including Zimbra, the email company it snapped up in 2007 for $350 million. FeedBurner, Jaiku, and Dodgeball are only a few of the startups languishing in obscurity under the Googleplex.

The Office of the Small Business Advocate has this news:
END_OF_DOCUMENT_TOKEN_TO_BE_REPLACED

The government has been backing up to the back doors of these institutions, unloading truckloads of cash. Many have used the funds to purchase other banks or shore up their balance sheets; few have passed any relief to their customers.  The backlash against them has primarily been debt repudiation (bankruptcy and foreclosure) and now, debt cancellation.

Spinner excoriated OneWest for repeatedly refusing to work out a deal, for misleading him about the dollar amounts at stake in the case, and for its treatment of the couple over months of hearings.

He canceled the debt because the bank “must be appropriately sanctioned so as to deter it from imposing further mortifying abuse against [the couple].”

The bank is involved in a similar case in California, where it’s trying to foreclose on an 89-year-old woman, despite two court orders telling it to stop.

The very thing that the former endowment chiefs had worried about and warned of for so long then came to pass. Amid plunging global markets, Harvard would lose not only 27 percent of its $37 billion endowment in 2008, but $1.8 billion of the general operating cash – or 27 percent of some $6 billion invested. Harvard also would pay $500 million to get out of the interest-rate swaps Summers had entered into, which imploded when rates fell instead of rising. The university would have to issue $1.5 billion in bonds to shore up its cash position, on top of another $1 billion debt sale. And there were layoffs, pay freezes, and deep, university-wide budget cuts. 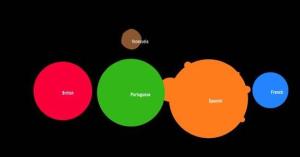 This is mainly an experimentation with soft bodies using toxi’s verlet springs.
The data refers to the evolution of the top 4 maritime empires of the XIX and XX centuries by extent. The visual emphasis is on their decline.

The 22 banks that got the most help from the Treasury’s bailout programs cut their small business loan balances by a collective $10.5 billion over the past six months, according to a government report released Monday. 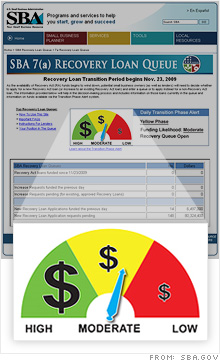 The Small Business Administration said Monday that it has run through all of the $375 million Congress allocated to temporarily waive fees and boost guarantees on loans backed by the SBA’s lending programs. Businesses still hoping for a slice of the pie can get in line, cross their fingers and wait.

Words That Get The Job Done | Information Is Beautiful.net

How To Get Replies – Online Dating

Dating site OKCupid examined which words in an opening email to women increased or decreased the chances of a reply. Hilarious and revealing.

Do a Sales Job on Yourself – Sales Trust – Entrepreneur.com

The idea is so plain it can be difficult to believe. It seems paradoxical: Stop trying to control your customers and you will get better results than if you try every trick in the book.

The Genius of Capitalism | Tom Tomorrow 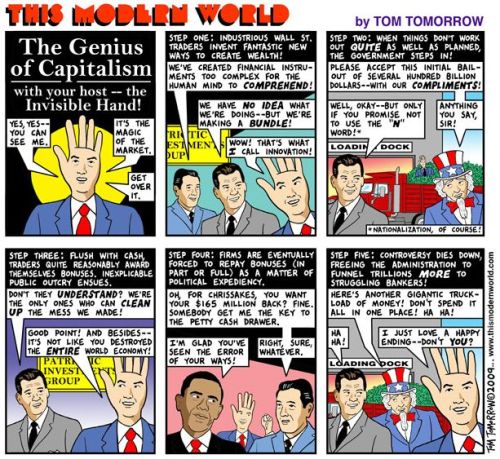 Tagged bailout, economic crisis, economy, financial institutions, Recession, They are all a bunch of bastards