Neither snow nor rain nor heat nor gloom of night stays delivery workers from getting hungry New Yorkers their food, and now, the city is finally stepping up on their behalf.

Who Is Buying In New York City, And Who Is Leaving? | Forbes

Despite the dire reports about the New York City real estate market, transactions are taking place and, in some cases, there are bidding wars — and not just in the suburbs. 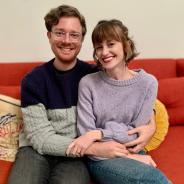 Here’s a look at two sets of buyers and what they encountered during their experience in a housing market affected by the pandemic.

These people have left big cities for good. Here’s where they landed | CNN

Ian Group loves New York City. He was born and raised there. So he was as surprised as anyone when he and his wife bought a home in Boca Raton, Florida, and decided not to go back to the city.

It was not a decision they took lightly.

“I love going downstairs to my favorite smoothie place, taking my son to Central Park,” said Group. “But the biggest driver for me is being where we can have it all. A good quality of life, space, affordability. Once Covid hit, we knew we didn’t want to be in the city anymore.”

Today he’s the founder of A La Mode, a completely nut-free, egg-free and sesame-free ice cream that has generated sales of $2 million.

The brand, which has a successful shop in New York City, is already in more than 1,450 stores around the country.

Restaurants are Roth’s passion. By 35, he had launched and sold three of them in New York. Roth’s WestSide Steakhouse was his last one, and it was pivotal because it allowed him to expand as an entrepreneur.

How New York City Is Working To Merge Government With Innovation | Co.Exist

With a budget that is many millions of dollars in the red, the New York City Housing Authority—North America’s largest low-income landlord—doesn’t have a lot of cash to spare. So it’s not ideal that the electricity and heating bills for its more than 2,000 buildings are much higher than they should be. The agency, abbreviated NYCHA, estimates its spends more than 40% more on energy than a typical apartment building in the city. But tackling such a large and sprawling problem and encouraging energy conservation—especially when, in many NYCHA buildings, residents don’t pay their own electric bills—isn’t straightforward. “When you’ve been doing something one way for a decade, it’s really hard to step back and see the opportunities in a different light.”

So the agency approached Mayor de Blasio’s Office of Tech and Innovation with the problem, and out of that came two new open innovation challenges launched on Tuesday. Their aim is to ferret out ideas, from the private sector, for reducing electric bills without taking away residents’ control of their own apartments and, in a smaller number of buildings, reduce steam heating bills.

And for 25 year-old Clarisse Sango, class is in session.

The single mother emigrated from Burkina Faso in 2011. Her English was limited. Her resume nonexistent. She struggled to find a job.

“If you just came from Africa and you don’t have any resume or any experience, it’s hard,” Sango told CNNMoney’s Cristina Alesci.

But now Sango is enrolled at Hot Bread Kitchen, a New York City nonprofit that trains low-income immigrant women in the craft and commerce of baking.

How one Italian restaurant stands out in New York City | Mashable

It’s hard not to feel like you’re part of the warm and caring Italian family when you walk through the doors at West 56th street in New York City. Sal Scognomillo, the current head chef at Patsy’s Italian Restaurant is a jovial, sweet man who exudes a genuine contentment with life — hard to find in the city, where so many appear beaten down by how difficult it is to make it here.

Patsy’s Italian Restaurant has been around since 1944, when Pasquale Scognamillo opened up the location in Midtown. Since then, four generations of the family have worked in the kitchen preparing the food, and front of the house greeting guests and answering the phone. What really separates Patsy’s Italian Restaurant from the thousands of other restaurants in New York City is they make everyone who walks through the door feel like family.

Yes, Ladies, You Can Walk Around the City Topless | New York News

A woman’s right to go topless in New York has a long history. The defendants in the 1992 case People v. Ramona Santorelli and Mary Lou Schloss were arrested along with five others in a Rochester park for violating a law which prohibited women from showing “that portion of the breast which is below the top of the areola.” (Areola = coloring around the nipple). Santorelli and Schloss argued that the law was “discriminatory on its face since it defines ‘private or intimate parts’ of a woman’s but not a man’s body as including a specific part of the breast.” The New York Court of Appeals ruled in favor of the two women.