Amazon’s entertainment empire is about to get a massive boost. 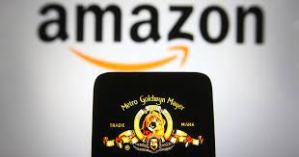 The company announced on Wednesday that it’s signed an agreement to acquire MGM Studios for a purchase price of $8.45 billion. It’s a blockbuster deal that will further bolster Amazon’s already-potent entertainment division, the Emmy- and Academy Award-winning Amazon Studios.

The acquisition turbocharges Amazon’s efforts to make noise in Hollywood, giving the company a massive roster of beloved entertainment properties to support and mine for new ideas. And that’s in addition to an upcoming MGM slate that includes new movies for James Bond and The Addams Family, as well as House of Gucci, and the Aretha Franklin biopic Respect.

This entry was posted in News and Views and tagged Amazon, mgm, the James Bond studio. Bookmark the permalink.