A “lost” letter written by Albert Einstein to a rival physicist recently sold to an anonymous collector for $1.2 million at auction. The handwritten letter includes Einstein’s famous E=mc2 equation and is one of just four known examples of the equation in the physicist’s own handwriting, according to archivists from the Einstein Papers Project at Caltech and the Hebrew University of Jerusalem. 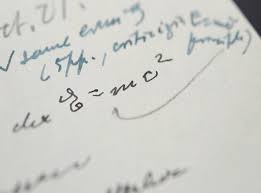 The one-page letter, written in German on paper with Einstein’s blind-stamped personal Princeton letterhead, was sent to Polish American physicist Ludwik Silberstein, a well-known critic of some of Einstein’s theories at the time. The document is signed “A. Einstein” and is dated Oct. 26, 1946.

This entry was posted in News and Views and tagged E=mc2, Einstein letter. Bookmark the permalink.