Rotterdam-based studio Ector Hoogstad Architects is behind the creation of the world’s largest bicycle parking center. The enormous project is part of a grand scale redevelopment of the Utrecht Centraal Railway Station in the Netherlands and boasts an innovative layout that manages the flow of both pedestrians and cyclists. 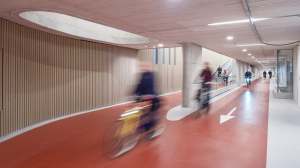 The user-friendly project includes the construction of a multi-story bicycle parking hub, which caters for a world record capacity of over 12,500 bikes. The project, which started construction in 2017, is set to reach completion later this year and is an example of how cities can accommodate a growing number of cyclists.