I Am Truly The Worst | Peter Mehit 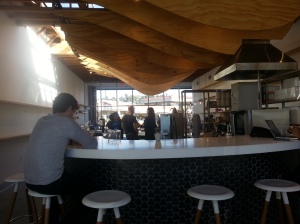 My daughter is a trainer and wholesale relationship manager for Four Barrel coffee, an independent coffee roaster in San Francisco.  Through my daughter’s work, I’ve learned that there is an extremely passionate world around the constellation of similar roasters such as Blue Bottle, Sight Glass and Intelligencia.  It is a world of cuppings, flavor notes and events that rival the wine world.  This universe has its hipster Robert Parkers, high price tag offerings and barista competitions where winners walk off with $50,000 prizes.

But we’re not going to talk about that world.  Last Saturday night, Dinosaur Coffee, a shop that features Four Barrel’s coffees, had a parody event called the “First Annual World’s Worst Coffee Competition”.  Michelle, the owner, has built a wonderful space that has already become a hit in the neighborhood.  It was the perfect stage for the event.

The official judges rubric evaluated the coffee based on quality (one measure, pleasant to disgusting), the performance of the competitor and originality.  There were seven competitors and the point was to produce the worst possible coffee imaginable.  The audience and judges were not disappointed.

The MC duties were fantastically helmed  by Matt “Hattie” Hein, who kept the proceedings moving with questions and off the wall riffing.  The judges, Tony Konechy founder of Trox, an LA roaster, Lizz Hudson a, ‘general coffee industry giant’ and David Pinsof, a co-creator of ‘Cards Against Humanity’, awaited the cuppings with nervous anticipation.

The first competitor, Daedelus  / Alfred Darlington, a ‘coffee superhero’, offered a folksy discussion about a vacuum packed coffee that would be good until 2017.  The results of his efforts produced mild bemusement from the judges.  Maybe the worst would not be so bad for them.  They would find out differently.

Erik Staack Christensen did a hilarious send up of creating catnip laced coffee as a homeless cat.  He began by lamenting his lack of opposable thumbs. Dressed in funky clothes and a cat mask, he suggested he made his creation from ‘pre-chewed beans, I don’t have a grinder’. He served the coffee to the judges in cat food tins.  When he saw the judges repel, he comforted them with, “I washed out the really big chunks.”

Christopher ‘Nicely’ Alameda, who himself has won some real competitions, came as a wizard serving ‘Chock Full of Nuts’ coffee, saying that it featured the actual taste of New York.  The entire eleven ounces of coffee were poured into a large pitcher and hot water dumped on top.  Then, for ‘mouth feel’ he added Farmer John’s lard to each judge’s cup.  The tasting produced interesting facial responses from the judges, who dutifully sipped and spit and looked entirely unhappy.

Christine Johnson, whom can be seen telling Patton Oswalt and Jerry Seinfeld that Handsome Coffee in downtown LA offers no sweeteners in an episode of Seinfeld’s ‘Comedians in Cars Getting Coffee’ web series, presented her coffee as Batwoman, to the approval of the women in the audience. Instead of a grinder, she placed the beans inside of a sock and beat them with a hammer.  Perhaps out of frustration from dealing with Seinfeld and Oswalt.

Her boyfriend, Sumi Ali, took a decidedly different tack from the rest of the competition, delivering a insightful discussion of coffee sourcing and the roasting process.  His process for creating his coffee was to dump an package of expensive coffee into a blender, adding hot water and blending it up.  It was served, unfiltered, to the judges.  An audience member sampled some and was attempting to remove grounds from between their teeth for several minutes.

Tayler Mehit, my daugther, presented her coffee as the artist formerly and currently known as Prince. Staying in character despite struggling with the water carafe, her timing was atomic. Presenting a dubious coffee that somehow smelled like peanut butter, she removed a lacy red scarf to use as a filter.  After the coffee was passed through it, she looked the audience with a deadpan expression. “One of you can keep this,” she said in a breathy voice.

Finally, as she was serving it, she took out a small vial. Looking at each judge slowly, she lifted her head and spoke deliberately, “I wanted this to be special for you.  These are the tears of doves that I have collected for 20 years.” She then took an eye dropper and placed several drops in each cup.  “This is what it tastes like, when doves cry.”

The final competitor, Devin Chapman, pulled out all the stops.  Starting with an expensive, highly sought after coffee, he posited his premise.  ‘I’m going start with an amazing coffee, and show  you what happens when we don’t care about what makes coffee amazing.  Especially the smells and how they affect our sense of taste.”

Mr. Chapman had done extensive research to find the cheese that contains the same bacteria found around your private parts. It smelled terrible.  He had taken the judges cups and placed them upside down over the cheese for several hours so they would be infused with the smell.  He also stored the coffee with some of the cheese beside it for several weeks.  During his demonstration, he was passionate about the processes high end roasters use and how just a little deviation destroys the coffee experience.

Then, he went a little nuts.  “I really want you to appreciate this cheese,” he said, and then began spreading it around the rim of each judges cup.  Multiple times. Each time,  you could see the horror registering on the judges faces.  They tasted it, barely.  The grimaces fairly matched what you would expect from the YouTube cinnamon challenge.

After a break and tallying of scorecards, the winners were announced.  While Erik’s homeless cat almost claimed the crown, Tayler won, her Prince interpretation carrying the day.  Her prize was a spoon that has inscribed on the handle “Winner 2015 Worst Coffee Competition” and in the bowl “I Am Truly The Worst”  She also received a dunce cap that will be passed annually, from winner to winner, in the manner of the Stanley Cup.  Her name will be embroidered on it as the very first winner.

It was a great, fun event that poked fun at a sometimes almost too serious world, and everyone involved is to be applauded for their amazing sense of humor. Even as a coffee Luddite, I was able to understand what they were poking fun at.  It was a night of laughter that rivaled a comedy club.  This is the first annual event, so watch for it next year.

Congratulations to Michelle of Dinosaur Coffee for a great event.  If you’re local to the Los Feliz area of Los Angeles, check them out:

– Apologies to the other contestants for lack of photos.  My personal cell battery was dead and I had these sent to me.  Plus, Tayler’s my kid, so, there’s that.  Thank you to everyone for a fantastic evening.  – Ed