The Jobs Numbers: Who’s Hiring in America—and Who’s Not | Bloomberg

U.S. employers added 157,000 jobs in July, and the nation’s unemployment rate fell to 3.9 percent, according to data released Friday by the Labor Department. Meanwhile, average hourly pay for workers rose 2.7 percent from a year earlier, to $27.05 from $26.34.

Below are the industries with the highest and lowest rates of employment growth for the most recent month. Additionally, monthly growth rates are shown for the prior year. The latest month’s figures are highlighted. Wage data are shown when available.

Starting and managing a business is no easy feat, even for Google

While it’s currently one of the most powerful and respected businesses in the world, nearly 20 years ago it was just a small group of people working at a very typical startup, all-nighters and all.

“The founders [Larry Page and Sergey Brin] built the company in the image of what they saw at Stanford graduate school,” Eric Schmidt, the former CEO of Google and current chairman, told Reid Hoffman on Masters of Scale, a podcast series examining counterintuitive theories to growing a company. He added, “that graduate student culture, that sense that somehow we’re about to discover something new, permeated the decision-making, and traditional experience wasn’t present.”

Should Your Company Require College Degrees When Hiring? | All Business 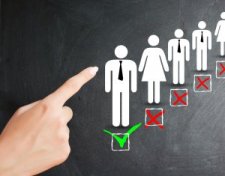 There has been talk about how the global economy has become too obsessed with college for years now. Students enter college, spend four years learning about something with little workplace value, and graduate with mountains of debt and a degree not worth the paper it is printed on.

And now one major British company has decided to really make that degree even less valuable. As the Huffington Post has reported, British accounting firm Ernst & Young has announced it will be removing the degree classification from its entry criteria. The company declared that there is “no evidence” success at university correlates with achievement in later life.

Should other companies follow the example of Ernst & Young, and has the college degree truly become something useless? The answer, like so many things, is “it depends.”

Is a reservation about an employee a deal-breaker? | Mashable.com

Hiring isn’t easy. An interviewer must consider a candidate’s potential in light of the future of a department and a company (sometimes with little guidance). In the absence of certainty, it’s not uncommon for a hiring manager to pick the applicant who possesses what Lily Zhang of The Muse describes as “sparkle.” It’s easier to like a top candidate who doesn’t simply excel over the course of the job search process, but who manages to outshine his competition.

But sometimes, when you’re leading a hiring process, you’ll find that an applicant who is strong on paper doesn’t “sparkle.” Instead, something feels a little off. Here’s what you should do when you’re uncertain how to proceed.

1. When it’s something the candidate could overcome

A candidate might not stand out simply because he’s not a strong applicant. Interviewing is a skill, and just like there are poor test-takers, there are people who study hard and then freeze up when the big day comes. In other words, his interview performance — while less than ideal — wouldn’t bear any correlation to his future job performance.

Small Businesses Are Going on a Hiring Binge | Bloomberg Business

(Bloomberg) — Sterling Risk Advisors, an Atlanta-based property and casualty insurance broker with 86 employees, has added 13 workers since June and will probably hire 10 to 15 more this year.

“We are committed to growing,” said Doug Rieder, 50, president and co-founder. “We feel a lot better about business. We are pretty bullish right now.”

Small business, responsible for most American job creation, is finally gaining momentum, giving an expansion approaching its sixth anniversary some legs and leading an acceleration in job creation. Confidence is near a post-2007 peak for small companies, construction is recovering and credit conditions are easing.

Employers Will Have to Raise Wages. They Just Don’t Know It Yet. | NYTimes.com

American employers are the equivalent of a shopkeeper who has a “Help Wanted” sign permanently on display in his window, but never actually hires anybody. None of the applicants who come in offer the perfect mix of skills, experience and willingness to accept low pay that the shopkeeper is looking for.

That’s one way of reading some key measures of the labor market, updated Tuesday, that shed light on what afflicts the economy and where things will go from here.

According to the latest Labor Department data, employers had 4.8 million positions they were looking to fill in October. That’s up 25 percent in the last year and 125 percent since the start of the economic expansion in mid-2009.

But for all these vacancies, actual hiring isn’t in a similar boom. The number of people hired is up only 12 percent in the last year and 33 percent over the five-year expansion.