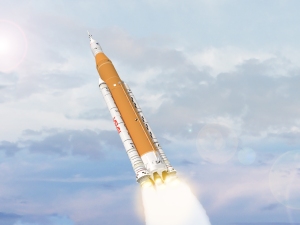 Officials at NASA are no doubt both excited and nervous as the agency gets ready for the debut of its most powerful rocket ever, dubbed the “Mega Moon rocket.” The vehicle is officially known as the Space Launch System (SLS) and is part of NASA’s Artemis program. It is being prepped for a rollout towards the launch pad at Kennedy Space Center in Cape Canaveral, Florida, on Thursday (March 17) for prelaunch testing of the Artemis I mission.

We here at Live Science are always over the moon about any new launch vehicle, but NASA’s upcoming spaceship makes us especially giddy. Here are a few reasons why.

This entry was posted in News and Views and tagged Artemis program, Mega Moon rocket, NASA. Bookmark the permalink.