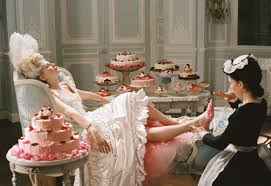 The quick answer to this question is a simple “no.” Marie Antoinette, the last pre-revolutionary queen of France, did not say “Let them eat cake” when confronted with news that Parisian peasants were so desperately poor they couldn’t afford bread. The better question, perhaps, is: Why do we think she said it?

For background, the quote has been slightly exaggerated in its translation from French to English. Originally, Marie Antoinette was alleged to have said, “Qu’ils mangent de la brioche,” or “Let them eat brioche.” While this sweetened bread is more expensive than an average baguette, it isn’t exactly the icing-laden, multi-tiered gateaux you might have imagined the queen had in mind. That said, this hyperbolic translation doesn’t change the point, at least from a propagandist standpoint; it still suggests that the French queen was arrogant and out-of-touch with the working class. With callous aristocrats like this in charge, things will never improve for the average French citizen. Vive la révolution!

This entry was posted in Uncategorized and tagged Let them eat cake, Louis XVI, Marie Antoinette. Bookmark the permalink.