Would you rather be feared or loved? For three years, Dan O’Malley opted for the latter–and every day, he says, he failed his employees a little more. 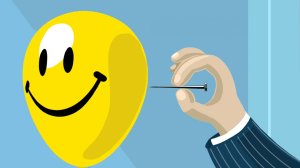 The founder and CEO of Numerated stumbled onto that epiphany by accident: The four-year-old Boston-based startup, which helps banks and credit unions automate their processes, went into crisis mode in March 2020, when the Small Business Administration launched the Paycheck Protection Program. It turns out, when your entire 55-person team is working 20-hour days for weeks on end (to help banks process roughly $250 million in forgivable small-business loans per hour), you don’t have time to mince words. You do, however, start to bond with the people around you down in the foxhole.

That was the secret sauce, right there. “I didn’t have the time to be worried about how people would take the feedback. I just had to give it,” O’Malley says. But brutal honesty can be jarring, and can elicit defensive reactions, so he added a personal twist. He’d start with a short warning: “This is probably going to come off rough, and I don’t mean it that way.” And after detailing exactly what went wrong, he’d ask: How can I help? What do you need to fix it?

This entry was posted in Tools and Information and tagged Feedback Style, management style. Bookmark the permalink.