The meat-free Impossible Burger has gone from “impossible” to “frankly, pretty commonplace” within an impressively short period of time. Perhaps looking for its next big sci-fi challenge, Impossible Foods announced Tuesday that it is moving beyond plant-based meat and into another animal product in the form of plant-based milk. 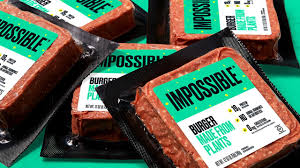 “The plant-based alternatives that are out there are inadequate,” Impossible CEO Pat Brown said. “The reality is that if they weren’t, there wouldn’t be a dairy market.”

While Impossible Milk is still in the research and development phase and not yet available commercially, the company showed off samples of the new milk-inspired foodstuff (err, drinkstuff) during a demonstration from its food lab; showcasing a plant-based milk alternative that appears far more creamy and milklike than current milk substitutes such as soy milk, almond milk, coconut milk, and assorted others. It also will not curdle when it comes into contact with hot beverages, as shown by the researcher carrying out the demo by mixing it with hot coffee.

This entry was posted in News and Views and tagged Impossible Burger, Impossible Foods, Plant-Based Milk. Bookmark the permalink.