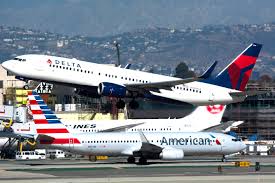 Delta said it will suspend flights between the United States and China starting on Sunday until at least April 30, according to a press release.

That’s four days earlier than it had initially planned. Delta’s last China-bound flight leaves on Saturday, February 1 and its last returning flight from China to the United States leaves on Sunday.

Delta moved the date up after the US State Department warned this week that people should not travel to China due to concerns about the spread of coronavirus, which was first discovered in Wuhan, China, in December.