The SBA and PROdnose – The Wisdom and Musings of Jim Ely, SBA pro 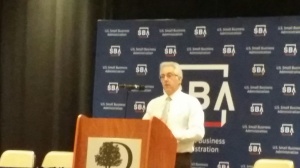 After Prodnose, a pedantic and nosy character, who appeared in the newspaper columns of J B Morton in the Daily Express.   J B Morton wrote under the pen name Beachcomber.  Twenty years before the word appeared in his column, the poet Dylan Thomas once wrotein 1934:  “I want you to think of me today … singing as loudly as Beachcomber in a world rid of Prodnose.”

TIP OF THE WEEK

Being a prodnose about this, I calculated the correlation coefficient between SBA 7(a) loan volume and GDP for over six years using the Microsoft CORREL function.  It came out to a statistically significant 0.86.

That would imply the economy won’t continue to grow as rapidly as it is now.

AHEAD OF THE YIELD CURVE

On Friday, it was reported that employment surged by 250,000. Yearly pay increases topped 3% for the first time in nine years. And unemployment remained at a near 50-year low.

Prodnosing the numbers, you’d note that the big payroll total was partly fueled by workers in the Carolinas returning to jobs after staying home during Hurricane Florence in September.

At last month’s sale of the 30 year Treasury bond the yield ended up at 3.344%.  This week’s sale is part of a record amount of 3-year, 10-year and 30-year securities offered during one quarter.   The Treasury is on track to issue $1.34 trillion in new debt this year, more than double the amount in 2017.

The slope of the yield curve—the difference between the yields on short- and long-term maturity bonds—has achieved some notoriety as a simple forecaster of economic growth. The rule of thumb is that an inverted yield curve (short rates above long rates) indicates a recession in about a year.  More generally, a flat curve indicates weak growth and conversely, a steep curve indicates strong growth.

Here is how the yield curve has changed over the last month and this week’s interesting little table of data:

What does all this mean?

The Federal Reserve Bank of Cleveland in their monthly assessment of the yield curve and predicted GDP growth said that expectations of growth jumped up somewhat.  Using past values of the spread and GDP growth suggests that real GDP will grow at about a 2 percent rate over the next year.  So the yield curve is still optimistic about the recovery continuing, even if it is somewhat pessimistic with regard to the pace of growth over the next year.

The majority of top Federal Reserve officials believe that interest rates will have to continue to increase until the economy slows down from the rising cost of borrowing, according to minutes of the central bank’s September meeting.  The minutes also showed that just how long policy would have to be restrictive was an open question.  Officials only said “there is considerable uncertainty surrounding all estimates of the neutral federal funds rate.”  At the meeting, Fed officials removed the sentence indicating “the stance of monetary policy remains accommodative.”

The Fed’s next meeting on monetary policy concludes this week on November 8th.

There appears to be splenetic presentiment among the Federal Reserve Open Market Committee over an enervation of prodigiously recrudescent interest rates.

This entry was posted in News and Views. Bookmark the permalink.