Why a balanced diet is important | Live Science

You may be wondering why a balanced diet is important. The simple answer is eating a healthy, balanced diet is a vital part of maintaining good health and helping you to feel your best. While some groups of people, such as athletes, may require additional support by way of the best protein powders to fuel muscle growth, the majority of us can get everything we need by ensuring we’re eating a healthy and varied range of foods.

A balanced diet supplies the fuel your body needs to work effectively. Without balanced nutrition, your body is more prone to illnesses such as heart disease, diabetes, and cancer. Eating a variety of foods and consuming less salt, sugars, and saturated fats are essential to ensure your body functions at its best.

Eating After Workouts: The Science of Timing Meals and Exercise | Live Science 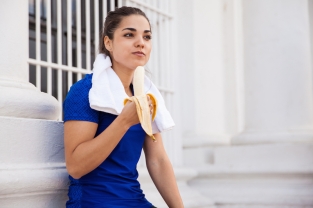 When it comes to fuel a workout, there’s a common pitfall: Eating too much to compensate. But not eating enough to fuel those squats or spin classes can also backfire.

So what’s the best way to eat to ensure you make the most of your workout? It turns out, setting up the body for the best recovery and muscle repair is a matter of timing.

Although exercising is no excuse to pig out, skipping meals after a workout can also be counterproductive, said Melinda Manore, an exercise scientist at Oregon State University and a former member of the President’s Council on Fitness, Sports and Nutrition (PCFSN) Science Board, who has done extensive research on nutrition, metabolism and exercise.

French toast served with butter syrup and bacon, a platter of fried seafood and hush puppies, and a cheesecake made with Reese’s peanut butter cups and fudge are among the meals singled out this year for their shockingly unhealthy nutrition content in a new report from a nonprofit watchdog group.

Nine meals from American chain restaurants were selected for the 2014 Xtreme Eating Awards, a list released yearly by the Center for Science in the Public Interest as a way to highlight meals that are very high in calories, saturated fat, sodium and sugar.

Nearly all the meals on this year’s list have at least 2,000 calories, and a few top 3,000 calories. “You could take half home and still overeat,” the CSPI says.